A wicker goat is stuck in my mind.

Well here we are 2 months later and still no bowl ..... but that is not true is there somewhere in my head, the information is still being processed and not ready to be send yet to my hands to craft the bowl.  I'm stuck, so I'd like to share some with you and hope this will trigger the next phase. The picture which keeps coming back when I think of the 1st bowl for this project is a sculpture of a wicker goat, but I cannot seem to get further and I don't want to just mimic the goat: 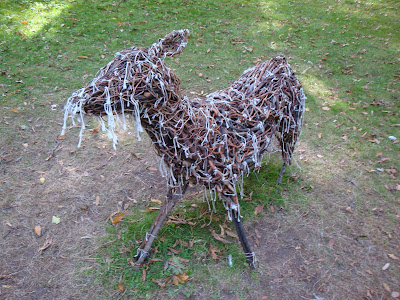 A wicker goat, but is it the goat or the wicker which has captured my attention? It's the wicker, the twigs and branches, not so much the bits of string, they had gone in my mind. I'm surprised they are so prominent now that I see the picture again. So it definitely is the wicker. Ireland has a strong tradition in wicker and it brings back a memory from my time in Ireland. I once went to a story telling performance in the National Museum Collins Barracks to see the Armagh Rhymers, they were dressed up and wore wicker masks. 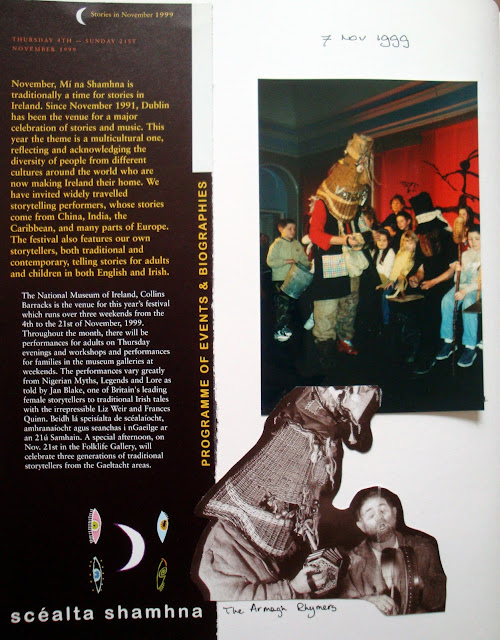 The masked tradition of "mumming" is said to date back 2500 years. In the ancient annals of Ulster (now more or less Northern Ireland), men in tall conical masks are mentioned as chief entertainers to King Conor, who lived at the royal fort of Emain Macha. This performance was part of a series of several performances to celebrate Scéalta Shamhna, the time for stories.......
Now wait and see if this has helped me along or only confused me more...to be continued.
Posted by Annemiek - TwoTrees at 12:14